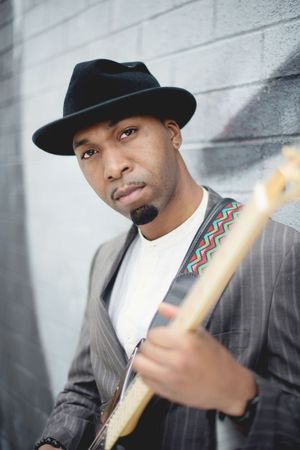 “Machado has mastered a soulful, jazzy sound that’s both exploratory and accessible, and the joyous looks he gives while performing show how much he enjoys taking his audience through unexpected turns.”
- Rolling Stone Magazine

Marcus Machado was named "Next Young Gun" by Rolling Stone Magazine in 2016, and since then he has not disappointed in becoming one of the most in demand young guitar players in the world, both in the studio and on the road. Marcus recently secured endorsement deals with D'Angelico Guitars, Beetronics, Tech 21 and D'Addario as well as performing on stage and / or in the studio with such contemporary luminaries as Anderson.Paak, Robert Glasper, Lalah Hathaway, Pete Rock, and Georgia Ann Muldrow.

In the last 2 years, Marcus has collaborated with multiple Grammy Award winning producer / keyboard player Robert Glasper on the music score for the Emmy Award winning SHO documentary "Apollo" and the NAACP Award winning documentary "Mr. Soul" , which pays tribute to Ellis Hazlip and his groundbreaking early 70's TV show "Mr. Soul". The film was released in early 2021 and made it to the Oscars shortlist. Marcus collaborated with Lalah Hathaway and Robert Glasper on the film’s track title “Show Me Your Soul."  Marcus also produced the film score for the critically acclaimed documentary "Contact High" which "spotlights the legendary photographers who have played critical roles in bringing hip-hop culture imagery onto the global stage."

The last two singles Marcus released, "I Can't Lose"  featuring Jermaine Holmes (from D'Angelo's Vanguard), and the funky instrumental "Dig" will both be featured as part of the soundtrack for the independent film festival award winning "Blue Diamonds", which Marcus produced. Marcus also performed the national anthem at Madison Square Garden for the New York Knicks, and at Oracle Arena for the Golden State Warriors, both in front of sold out crowds of over 20,000 fans.

In 2021 Marcus released a collaborative project with supergroup Th1rt3en feat. Pharoahe Monch, Daru Jones and Marcus Machado with a classic rock / hip-hop album called “A Magnificent Day For An Exorcism”,  that charted at #5 during its first week. Since then the group has continued to soar with hard hitting movie-like videos from leading singles "Fight" & “Cult 45” . The group was also featured on the Stephen Colbert Show and NPR Tiny Desk Concert with electrifying performances.

It didn't stop for Marcus as he stepped out on his own with his debut album "Aquarius Purple". Since the release it's been non-stop with rave reviews. The album was only released on vinyl, through Soul Step Records and sold out within 57 seconds! The purple vinyl limited edition also sold out within an hour. “Aquarius Purple”  was released digitally on April 30, on all streaming platforms. Marcus was also featured in both Guitar World  and Guitar Player magazines.

Marcus also has a production team called Mach-7 Muzik, with his sister Vicky Casis. They have been on a hot streak since the summer of 2020 releasing two projects "Black Summer", and “Black Summer Again” which features an array of different hip-hop rappers from New York City. It didn't stop for Mach 7 Muzik as they created QSTV, a bi-weekly show which provides creatives, artists, and musicians with a platform to showcase their talents through the pandemic. QSTV can be watched on Youtube, Twitch and Facebook. As Buzz Music recently said "Marcus' preferred sound does not stop with one genre".