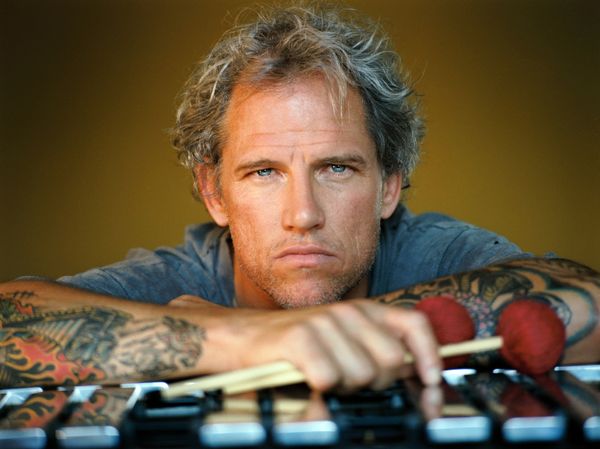 ALL MUSIC
JULY 2020 - review of new album "Rosewood"
“Dillon has crafted a hypnotic album that pulls you deep inside a percussive, sylvan-toned dreamscape.”

ALL ABOUT JAZZ
JULY 2020 - review of new album "Rosewood"
"A tour de force of melody and rhythm, right from its alternately fun and foreboding opener....."

GLIDE MAGAZINE
JULY 2020
"It is his evolved sound, moving from free form punk-inspired jazz to more melodic and focused pieces that make Rosewood a clear success and a step forward in his career."

OFFBEAT MAGAZINE
JULY 2016
"The breadth and sheer number of different voices Mike Dillon has at his command is impressive in just about any setting. On his new solo recording, inspired largely by the music of Elliott Smith, it’s downright staggering"

ALL ABOUT JAZZ
JULY 2016
"As idiosyncratic as Mike Dillon's work has been with Critters Buggin' and Garage a Trois, it's well-nigh impossible not to fall under the spell of the music he creates all by himself on Functioning Broke."

ALL ABOUT JAZZ
NOVEMBER 2014
"Dillon is the rare musician who can take tropes from any number of disparate musical worlds-metal and brazillian samba school for example-mash them together and create something truly fresh and new."

OFFBEAT MAGAZINE
MAY 2014
"The music of Mike Dillon combines many sources, yet comes out sounding unto itself. This latest report from the mind of Mike moves all over the map.  Overall, it is punk rock as played by great instrumentalists, with the lead voices being Dillon’s mallet instruments and Carly Myers’ trombone. It is most reminiscent of the Minutemen with its commitment to all styles and ability to play them and of the Dead Kennedys in its attitude and phrasing."

MODERN DRUMMER
SEPTEMBER 2014
"With this disc, multi-instrumentalist Mike Dillon (Garage A Trois, Les Claypool, Critters Buggin) may have given birth to a new musical genre: Afro-Brazilian-punk-jazz-art-rock.

SPLINTERS & CANDY
"When jazz hits you in the face with a stack of bricks, Mike Dillon is there twisting chaos into order before turning it back on itself again."

PITTSBURGH CITY PAPER
"A body in motion tends to stay in motion, at least when Mike Dillon is supplying the dance music. The psychedelic rock group shakes and gyrates with heavy, vibraphone driven grooves, delivering a steady stream of infectious rhythms and hypnotic percussion."

OFFBEAT MAGAZINE
NOVEMBER 2012
"Mike Dillon’s music is not your granddaddy’s bebopping, finger-snapping, shades and beret, too-cool-for-school jazz. It has an intensity and attitude taken from punk rock and a slightly dirty, loud sound that is found more on rock ‘n’ roll and electronica records. The songs have a deceptive complexity — they sound simple in that you can sing and dance to them, but they change textures and parts on a dime. Few musicians combine the chops and vision of Mike Dillon."

ALTSounds
SEPTEMBER 2012
"On one hand he exudes the musical chops absorbed from countless hours spent with Milt Jackson records, on the other hand he thrashes about with visions of Iggy Pop hard-wired to his frontal cortex."

THE WASTER
AUGUST 2012
"Dillon & Friends spread the fever with songs off his upcoming album Urn. The highlight of this show was the young Kim Basinger-looking trombonist dressed similar to a girl scout troop leader. On this night, the crowd saw how her instrument could help mold together transitions between opposing genres. From punk rock/ska to hip-hop with a two-step beat, this solo player equated an entire brass section, showing the crowd just how to blow without ever sucking (no pun intended. No, seriously, no pun.)"

How many artists have been praised a “punk rock provocateur,” “jazz  vibraphone visionary,” and “percussion virtuoso” in the same sentence? There’s only one: Mike Dillon. Whether through his affiliation with artists like Les Claypool, Primus, Rickie Lee Jones, Dean Ween Group and Ani Difranco, and collaborations such as Nolatet, Garage a Trois, The Dead Kenny G's, Critters Buggin or bands he has led, including Mike Dillon Band, Mike Dillon's New Orleans Punk Rock Percussion Consortium, Billy Goat and Hairy Apes BMX, the Texas-native has set his own standard for 25 years now.

Over the past decade, Mike Dillon has released a number of acclaimed albums, intertwining a range of influences from Zappa-esque eccentricity to Fishbone punk funk, D.C. Go-Go to Milt Jackson-influenced vibraphone majesty. Never before, however, has he recorded music so personal and committed to a sustained mood as his latest album, Functioning Broke. The recording finds Dillon solo on vibraphone and various percussion, building each track into its own minimalist, but multi-dimensional auditory landscape.

The current version of the Mike Dillon Band features guitarist Cliff Hines, Bassist Nathan Lambertson and a rotating cast of drummers including Claude Coleman Jr. (Ween), Simon Lott, G. Maxwell, Doug Belote and Paul Thibodeaux. With this line up, Dillon has continued exploring the connection between New Orleans street beats, Ska, funk, Hardcore and jazz. The band will release a new record in February 2017 titled, “Life is not a Football." Produced in New Orleans by Richard Maloney and Dillon with engineers Rick Nelson and Robert Mercurio, this album sounds like a Spotted Cat trad band that grew up playing Dead Kennedys and invited Captain Beefheart over for a dinner cooked by Thelonious Monk. The Mike Dillon Band has supported acts like Galactic, The Revivalists, Clutch, Primus, and Fishbone, while continuing to play music festivals and in cities across the U.S.

Mike's latest release, Life Is Not A Football, released April, 2017 (Royal Potato Family) is "A recording with the Big Easy coursing through its veins and equal parts Frank Zappa and The Butthole Surfers in its DNA. Life Is Not A Football, is a no-holds-barred affair, complete with rallying cries for justice, truth-to-power political and existential rants and plenty of inside jokes.